U.S. stock markets saw gains for the month and quarter, but not all stocks did well. Higher interest rates led to some volatility, especially for growth and technology companies. The Nasdaq Composite gained 0.48 percent during March, with the heavy technology weighting dragging down the index’s performance. The S&P 500 and Dow Jones Industrial Average (DJIA) saw stronger results, up by 4.38 percent and 6.78 percent, respectively. On a quarterly basis, the Nasdaq Composite gained 2.95 percent, and the S&P 500 managed a 6.18 percent gain. The DJIA led the way with an 8.29 percent return.

These positive results coincided with better-than-expected earnings growth. According to Bloomberg Intelligence, as of March 30 with 99 percent of companies having reported, fourth-quarter earnings for the S&P 500 were up by 5.8 percent. This result is much better than analysts’ initial expectations for an 8.8 percent drop. It marks the first quarter with earnings growth since the fourth quarter of 2019. Analysts are currently forecasting continued earnings growth for U.S. companies throughout the rest of the year.

Technical factors were also supportive for markets. Despite some volatility along the way, all three major indices remained well above their 200-day moving averages. This marks three straight quarters where the indices finished above their respective trend lines. The 200-day moving average is an important technical indicator. Prolonged breaks above or below this level can signal a shift in investor sentiment for an index.

International markets had a similar month and quarter, with riskier assets seeing more volatility. The MSCI EAFE Index increased by 2.30 percent during the month and 3.48 percent during the quarter. The MSCI Emerging Markets Index declined by 1.49 percent in March but managed a 2.34 percent return for the quarter. Both international indices were supported technically during the month and quarter, remaining well above their respective 200-day moving averages throughout the entire period.

Fixed income markets had a more challenging time, driven by rising long-term interest rates. The 10-year Treasury yield ended the month at 1.74 percent, up from 1.45 percent at the start of the month and 0.93 percent at the start of the quarter. Long-term rates rose throughout the quarter due to increased expectations for growth and inflation as the economic recovery continues. The Bloomberg Barclays U.S. Aggregate Bond Index fell by 1.25 percent during the month. This contributed to a 3.37 percent decline for the index during the quarter.

High-yield fixed income, which is less tied to interest rates and more aligned with equity markets, saw more positive results. The Bloomberg Barclays U.S. Corporate High Yield Index gained 0.15 percent during the month and 0.85 percent during the quarter. High-yield spreads continued to compress, ending the month at their lowest level since the start of the pandemic.

Medical Risks Back in Play

We saw the end of the pandemic’s third wave during the first quarter of the year, but case counts started to creep up in March. Although case growth is lower than it was during the past few months and vaccinations are likely to constrain further growth, the combination of the economy reopening and the spread of more contagious variants of the virus has increased risks again. Testing also raised concerns. The number of tests fell and the positive test rate increased, which indicates we have less visibility into the current spread of COVID-19.

Despite the rise in short-term risks, longer-term risks remain constrained with vaccination efforts improving in March. We finished the month with 16 percent of the population fully vaccinated and an impressive 29 percent of the population having received at least one dose. The average number of daily vaccinations increased notably throughout the month. This was due to greater supply and improved processes at the state and local levels. Looking forward, vaccinations are expected to bring the virus largely under control over the next several months. While we are not yet out of the woods yet—and people need to remain cautious until we get there—we are moving in the right direction.

Despite the rise in medical risks during the month, the economic data continued to improve. March’s jobs report showed that 916,000 jobs were added during the month, up sharply from February’s 379,000 and well above expectations. Much of the job gains were concentrated in the leisure and hospitality sectors, which have been hit hardest by the pandemic. We also saw a noted decline in the average number of weekly unemployment claims in March. These results indicate that the reopening of many states has started to accelerate the labor market recovery.

Consumers have noted the improved public health and economic conditions during the quarter. As you can see in Figure 1, the Conference Board Consumer Confidence Index hit a new post-lockdown high in March. This indicates consumers are starting to see a light at the end of the tunnel. While there is still work to be done to get back to pre-pandemic levels, the improvements in March are a positive signal for the pace of the economic recovery. 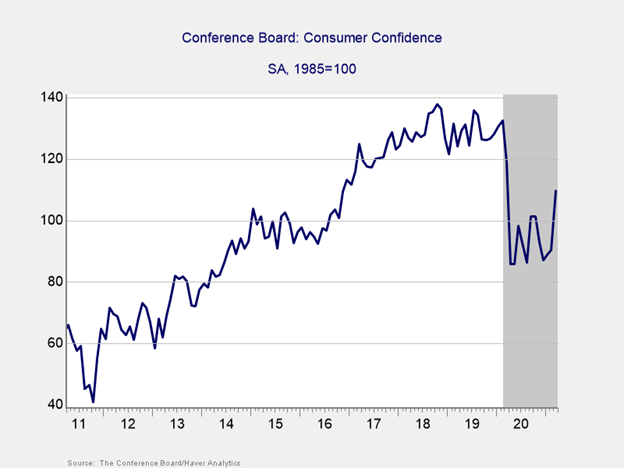 Consumer spending did see a dip in February. It was largely due to the inclement winter weather during the month, however, as well as the fading impact from the December stimulus package. With a return to more normal weather in March and the tailwinds from increased hiring and confidence—as well as another round of federal stimulus checks—we should see spending recover.

Business confidence and spending also showed signs of potential faster growth. Manufacturer confidence finished the month at its highest level since 1983 due to strong buyer demand and low business inventory. As was the case with consumer spending, business spending saw a modest weather-related decline in February. Given the high levels of confidence and the boost from the recent stimulus bill, however, we can expect to see a swift return to business spending growth reflected in upcoming data reports.

The Progress Is Real, but Risks Remain

We made real progress with vaccinations and the economy during the month. But even so, the rising case counts toward month-end served as a reminder that the medical risks are still out there. The potential for more infectious strains to cause faster case growth on a national level is a risk we need to keep an eye on.

Economically, risks have diminished with the recovery in hiring and confidence. The passage of the most recent stimulus bill in March will also help support spending. While the medical risks may worsen in the short term, the economy looks to have enough momentum to ride them out until the pandemic is brought under full control.

There is still uncertainty surrounding the pace and path of the expected recovery, and that could lead to more market volatility. A well-diversified portfolio that matches investor goals and timelines represents the best path forward for most. If concerns remain, contact your financial advisor to discuss your financial plan.