Equity markets saw widespread declines in September, wiping out gains from earlier in the quarter and bringing the major indices to their lowest closing levels for the year. The S&P 500 fell 9.21 percent during the month, which caused the index to lose 4.88 percent during the quarter. The Dow Jones Industrial Average declined 8.76 percent in September, capping the 6.17 percent decline for the quarter. The Nasdaq Composite lost 10.44 percent for the month and 3.91 percent for the quarter. Rising interest rates pressured equity valuations throughout the month and quarter and served as the primary sell-off factor.

These losses came despite improving fundamentals for the month and the quarter. Per Bloomberg Intelligence, as of September 16, 2022, with 99.8 percent of companies having reported actual earnings, the blended earnings growth rate for the S&P 500 in the second quarter was 8 percent. This is up notably from the initial estimates for 4.1 percent earnings growth at the start of earnings season and signals continued fundamental progress for U.S. businesses during the quarter. Fundamentals drive long-term market performance, so continued better-than-expected earnings growth is an encouraging signal.

While fundamentals were supportive during the quarter, technical factors were another story. All three major U.S. indices finished the month well below their respective 200-day moving averages, marking six consecutive months with all three indices finishing below trend. The 200-day moving average is an important technical indicator, as prolonged breaks above or below this level can signal shifting investor sentiment for an index. Last quarter’s continued technical weakness for U.S. markets is a potential cause for concern as it indicates that investors are cautious about U.S. markets.

The story was much the same internationally. The MSCI EAFE Index lost 9.35 percent in September and 9.36 percent during the quarter. The MSCI Emerging Markets Index dropped 11.67 percent for the month and 11.42 percent for the quarter. Technicals were challenging for both international indices, as they both finished the month below their respective 200-day moving averages. This has been the case every month this year, signaling continued investor concern with international equities.

Fixed income markets also experienced widespread declines due to rising interest rates during the month and quarter. The 10-year Treasury yield rose from 2.98 percent at the end of the second quarter to 3.83 percent by the end of the third quarter, bringing long-term rates well above pre-Covid-19 pandemic levels.

The rise in rates was even more pronounced on the short end of the curve, as the 2-year Treasury yield increased from 2.92 percent at the end of the second quarter to 4.22 percent at the end of September. The rising rates were driven by expectations for higher short-term interest rates from the Federal Reserve (Fed) throughout the rest of this year and into 2023. The Bloomberg Aggregate Bond Index declined 4.32 percent for the month and 4.75 percent for the quarter.

High-yield fixed income also experienced sell-offs during the month and quarter. The Bloomberg U.S. Corporate High Yield Index dropped 3.97 percent for the month and 0.65 percent for the quarter due to the rising rate environment and widening credit spreads in September. Spreads finished the quarter largely unchanged, however, after falling notably in July and increasing in August and September.

Third-quarter market turbulence was primarily driven by rising interest rates, caused by increased investor expectations for higher short-term rates. The Fed hiked the federal funds rate a combined 150 basis points (bps) at its July and September meetings to slow economic growth and combat inflation, and more rate hikes are expected at the upcoming November and December meetings. The sharp increase in the yield on the U.S. Treasury 10-year note put pressure on equity and fixed income valuations.

Since the great financial crisis, long-term interest rates have largely remained muted—the 10-year Treasury yield spent most of the post-crisis period well below 3 percent—and the recent sharp increase has rattled markets. While this year’s rate increases and market volatility have served as a headwind for investors, there are signs that the worst impact from rising rates may be behind us. If we do see rates stabilize from current levels it will help support markets going forward.

Last quarter’s biggest economic news was the slowdown in the housing market. Housing was one of the best-performing sectors in 2020 and 2021, but rising mortgage rates and home prices have contributed to a sharp slowdown this year. The August existing home sales report showed that the annual pace of existing homes sales fell to their lowest level since initial lockdowns were implemented in spring 2020. The pace of existing home sales peaked in January at a rate of 6.49 million sales per year, with sales declining every month since and ending August at an annualized rate of 4.8 million sales.

The slowdown is one of the most direct impacts of the Fed’s tighter policy, as the national average 30-year mortgage rate increased from 3.3 percent at the start of the year to just over 7 percent at the end of September. In the intermediate to long run, the slowdown in housing sales should help support the Fed’s attempts to combat inflation. At the moment, however, housing is still a significant contributor to inflation, signaling the possibility of more house price declines ahead.

Even though the housing sector was weak, the rest of the economy continued to show signs of growth. Hiring continued to impress, as more jobs than were expected were added in both July and August. Job openings are plentiful across the country and the unemployment rate remained well below historical averages. This is a sign that the economy continues to grow despite the headwinds created by high inflation and rising rates.

The strong job market translated into continued spending growth during the quarter. August saw solid retail sales and personal spending growth, with retail sales coming in above economist estimates. Spending growth was supported by positive consumer confidence, as the Conference Board Consumer Confidence survey showed that consumer confidence finished September at its highest level since April. The promising job market and falling gas prices helped drive the improvement in confidence that we saw for last month and last quarter. 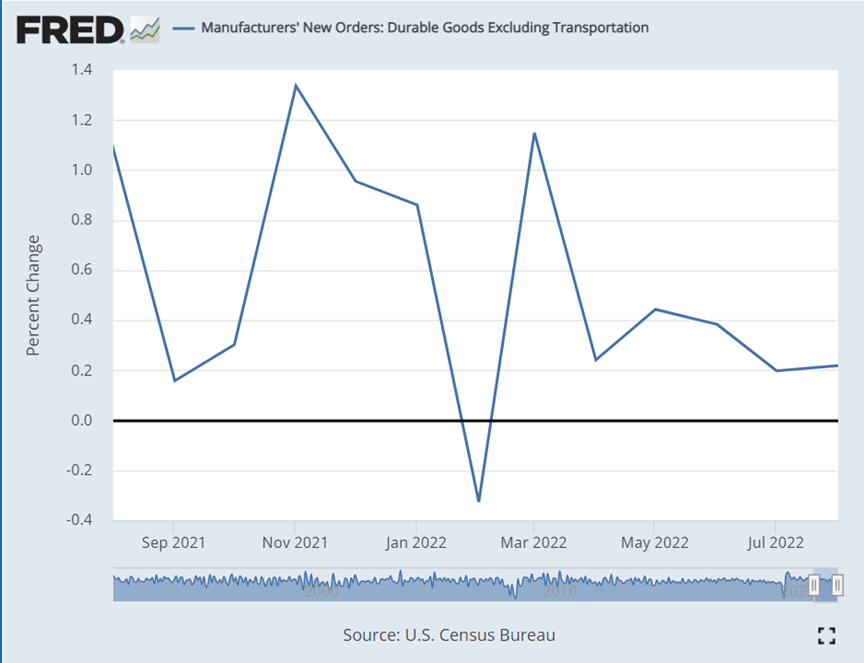 Overall, while there are signs that the Fed’s higher rates are starting to slow growth, with housing being the best example, the economy as a whole continues to expand—which could provide a cushion for markets going forward.

As we saw during the quarter, even though the economy continues to grow, there are still very real risks to markets. Although fundamentals are solid, short-term market performance can be heavily impacted by other factors. While we’ve likely seen the worst impact from rising rates and high inflation on markets, it’s certainly possible that inflation will remain stubbornly high at year-end, which could lead to even higher short-term rates than investors currently expect. Beyond the rates themselves, the Fed’s restrictive monetary policy is expected to continue to slow economic activity for the rest of the year and into 2023.

Beyond economic risks, the rest of this year also has political concerns, starting here in the U.S. The November mid-term elections could see one or both chambers of Congress switching control, in addition to important state and local elections, with most states undergoing gubernatorial elections. While political developments are difficult to forecast, the additional uncertainty from the elections could negatively impact markets and should be monitored.

There are also political risks abroad, as evidenced by the continued Russian invasion of Ukraine and the general slowdown in global economic growth that we’ve seen this year. While geopolitical risks have largely stabilized during the quarter, the risk for escalation of the war or other negative surprises should be monitored.

Despite existing risks, however, economic fundamentals here in the U.S. are solid and there are reasons for optimism going forward. We’ve seen signs that inflation may be starting to slow and there is hope that the recent market pain has potentially set investors up for better times ahead. Looking historically at periods with sustained sell-offs, subsequent market returns have often been strong. Despite short-term risks, the long-term picture is more encouraging; fundamentals are sound and many risks are currently priced into markets.

Given the risks and potential for additional short-term shocks, a well-diversified portfolio that matches investor goals and timelines remains the best path forward for most. As always, you should reach out to your financial advisor to discuss your current plan if you have concerns.

Disclosure: Certain sections of this commentary contain forward-looking statements based on our reasonable expectations, estimates, projections, and assumptions. Forward-looking statements are not guarantees of future performance and involve certain risks and uncertainties, which are difficult to predict. Past performance is not indicative of future results. Diversification does not assure a profit or protect against loss in declining markets. All indices are unmanaged and investors cannot invest directly into an index. The Dow Jones Industrial Average is a price-weighted average of 30 actively traded blue-chip stocks. The S&P 500 Index is a broad-based measurement of changes in stock market conditions based on the average performance of 500 widely held common stocks. The Nasdaq Composite Index measures the performance of all issues listed in the Nasdaq Stock Market, except for rights, warrants, units, and convertible debentures. The MSCI EAFE Index is a float-adjusted market capitalization index designed to measure developed market equity performance, excluding the U.S. and Canada. The MSCI Emerging Markets Index is a market capitalization-weighted index composed of companies representative of the market structure of 26 emerging market countries in Europe, Latin America, and the Pacific Basin. It excludes closed markets and those shares in otherwise free markets that are not purchasable by foreigners. The Bloomberg Aggregate Bond Index is an unmanaged market value-weighted index representing securities that are SEC-registered, taxable, and dollar-denominated. It covers the U.S. investment-grade fixed-rate bond market, with index components for a combination of the Bloomberg government and corporate securities, mortgage-backed pass-through securities, and asset-backed securities. The Bloomberg U.S. Corporate High Yield Index covers the USD-denominated, non-investment-grade, fixed-rate, taxable corporate bond market. Securities are classified as high-yield if the middle rating of Moody’s, Fitch, and S&P is Ba1/BB+/BB+ or below.