Solid December Caps Off a Strong Year for Markets

These positive results coincided with improving fundamentals throughout the year. According to Bloomberg Intelligence, as of December 10, 2021, the blended earnings growth rate for the S&P 500 in the third quarter was 41.1 percent. This is notably higher than analyst estimates at the start of earnings season for a more modest 28.4 percent increase. It also follows better-than-expected earnings growth for the index in the first and second quarters. The outcome highlights the strength of the economic recovery and shows that businesses have continued to successfully adapt and operate in a pandemic-driven world. Fundamentals drive market performance, and 2021’s return to earnings growth bodes well for future performance.

Technical factors also remained supportive for markets throughout the month, quarter, and year. All three major indices finished December above their respective 200-day moving averages, though late-November volatility briefly brought the DJIA below trend. The 200-day moving average is a widely followed technical trendline, and prolonged breaks above or below this level can signal shifting investor sentiment for an index. The three major indices have experienced solid technical support since the expiration of initial lockdowns in 2020. This indicates that investors remain confident in the health of the U.S. economy.

International markets also had a solid December. Performance was mixed, however, throughout the course of the quarter and year. The MSCI EAFE Index gained 5.12 percent during the month, which capped off a 2.69 percent quarterly return and an 11.26 percent return for the year. The MSCI Emerging Markets Index experienced a more muted 1.92 percent rise in December. Sell-offs earlier in the year, however, led to a 1.24 percent decline for the index in the fourth quarter and a 2.22 percent decline for 2021.

Technicals were mixed for international markets. The MSCI EAFE Index finished December above trend, after dropping below its 200-day moving average in November. This indicates potential investor concern for developed international markets. Emerging markets also saw challenging technicals throughout the quarter. The MSCI Emerging Markets Index spent the entire period below trend, marking six consecutive months below its 200-day moving average. The relative weakness for emerging markets in the second half of the year was due in part to investor concerns about the slowdown in Chinese growth, the country’s troubled property development sector, and the potentially negative impact of the Omicron variant.

Fixed income markets also saw mixed returns during the month, quarter, and year. Over the course of the year, long-term interest rates began to normalize closer to pre-pandemic levels. The 10-year U.S. Treasury yield increased from 0.93 percent at the start of 2021 to 1.52 percent at year-end. The rise in long-term yields served as a headwind for investment-grade fixed income performance, with the Bloomberg U.S. Aggregate Bond Index declining 0.26 percent in December. The index was able to eke out a 0.01 percent gain for the quarter, but it was down 1.54 percent for the year.

High-yield fixed income, which is typically less sensitive to changes in interest rates and more driven by fundamentals, returned a solid 1.87 percent for the month. This positive result contributed to a 0.71 percent gain for the quarter and a 5.28 percent increase for the year. High-yield credit spreads declined notably throughout 2021, from 3.93 percent at the start of the year to 3.10 percent by year-end. Declining credit spreads indicate that investors are willing to accept lower yields for investing in relatively higher-risk securities.

Medical Risks Rise at Year-End We saw medical risks increase toward the end of the year, as the Omicron variant drove case growth during the month. Average daily new cases in the U.S. rose to the highest recorded level, surpassing the previous peak from January 2021. While the rise in cases bears monitoring, there are signs that we are better positioned to weather this new wave, including improving vaccination rates and rising natural immunity as more of the population becomes exposed.

We finished the month with 62 percent of Americans fully vaccinated and another 12 percent having received at least one shot. This reflects a notable shift from earlier in the year and indicates that, on the whole, Americans remain relatively well protected. This is evident in fewer hospitalizations and deaths from the current wave. Progress on the vaccine front is expected in the months ahead, which should help mitigate the potential impact of the recent rise in cases.

Overall, while the rise in cases at year-end is worth monitoring from both public health and economic perspectives, the damage will likely be contained by high vaccination levels and natural immunity from previously exposed individuals.

Economic Recovery Remains Resilient Despite rising medical risks, the economic recovery continued at full speed to finish out the year. The labor market showed signs of improvement throughout the quarter, as the unemployment rate fell to 4.2 percent at the end of November. This is a notable improvement from the December 2020 unemployment rate of 6.7 percent and highlights the progress we made last year in getting people back to work. We also saw the number of initial jobless claims fall below pre-pandemic levels, which was an encouraging sign that the pace of firings decreased. While there is still work to be done, improvements on the 2021 hiring front indicate economic growth to start the new year.

After declining for much of the fall, consumer confidence showed signs of stabilizing at the end of the year. While growing concerns about inflation weighed on consumer sentiment, spending growth remained strong. Retail sales and personal spending continued to grow in November, and all signs pointed toward a strong holiday season for retailers. Consumer spending accounts for the majority of economic activity in the country, so the high levels of spending and improving sentiment are promising signs for economic growth in the new year.

Business confidence and spending also showed signs of continued recovery toward year-end. Business confidence rebounded swiftly following the expiration of initial lockdowns in 2020. We saw another surge in confidence in October and November 2021. As you can see in Figure 1, the Institute for Supply Management (ISM) Composite Index for manufacturing and service sector confidence reached a new record high in November, driven by soaring levels of pent-up consumer demand that encouraged business owners. This level of business confidence translated into faster business spending growth throughout the year, as core durable goods orders increased for nine consecutive months between March and November. 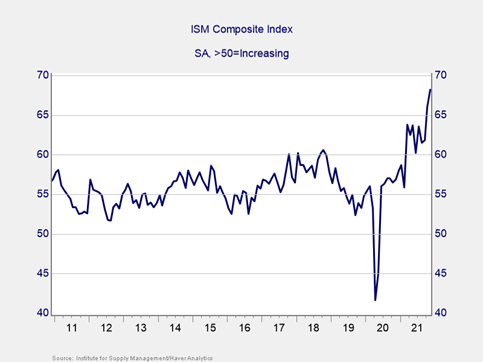 One sector that showed notable strength throughout the year was the housing sector. This market has been one of the bright spots in the current economic recovery, as low mortgage rates and shifting consumer preference for more space due to the pandemic led to a surge in prospective home buyers in 2020 and 2021. The pace of existing home sales in November finished well above pre-pandemic levels despite a lack of existing homes for sale and rising prices. Looking ahead, the housing sector is expected to show continued signs of growth in the new year. Rising mortgage rates and prices, however, may slow the pace of further improvements in the coming months.

Shifting Risks to Start the New Year While the economic recovery shrugged off rising medical risks at year-end, there are notable risks at play. The most immediate risk is political, as we saw at the end of the year when Congress had to act in order to avoid another debt ceiling confrontation. While the decision in December to increase the debt ceiling should let us avoid similar uncertainty in 2022, the episode is a reminder that political risks still have the potential to negatively affect the economy and markets.

Another area to monitor is the Federal Reserve (Fed) and the central bank’s decision to start normalizing monetary policy. The Fed recently announced a slowdown in its secondary market asset purchases, which could clear the way for a potential rate hike in early to mid-2022. While this is a necessary step in getting back to normal, and an encouraging signal that the Fed views the economy as healthy, the gradual removal of supportive monetary policy could rattle markets.

International risks are also present, even if they aren’t an immediate concern for U.S. investors. As previously noted, the slowdown in China last year was a headwind for international equities. Rising medical risks also could represent a risk for the pace of the global economic recovery.

While risks remain, we saw noted progress on the medical and economic fronts throughout 2021. We can expect to see continued growth in the months ahead due to the progress we’ve made and the relatively muted impact of the new variant on the pace of the economic recovery. That said, the track back to normal remains uncertain, and we can expect further setbacks along the way. Given this uncertainty, a well-diversified portfolio that matches investor goals and timelines remains the best path forward for most. If you have concerns, reach out to your financial advisor to discuss your financial plan.

Disclosure: Certain sections of this commentary contain forward-looking statements based on our reasonable expectations, estimates, projections, and assumptions. Forward-looking statements are not guarantees of future performance and involve certain risks and uncertainties, which are difficult to predict. Past performance is not indicative of future results. Diversification does not assure a profit or protect against loss in declining markets. All indices are unmanaged and investors cannot invest directly into an index. The Dow Jones Industrial Average is a price-weighted average of 30 actively traded blue-chip stocks. The S&P 500 Index is a broad-based measurement of changes in stock market conditions based on the average performance of 500 widely held common stocks. The Nasdaq Composite Index measures the performance of all issues listed in the Nasdaq Stock Market, except for rights, warrants, units, and convertible debentures. The MSCI EAFE Index is a float-adjusted market capitalization index designed to measure developed market equity performance, excluding the U.S. and Canada. The MSCI Emerging Markets Index is a market capitalization-weighted index composed of companies representative of the market structure of 26 emerging market countries in Europe, Latin America, and the Pacific Basin. It excludes closed markets and those shares in otherwise free markets that are not purchasable by foreigners. The Bloomberg Aggregate Bond Index is an unmanaged market value-weighted index representing securities that are SEC-registered, taxable, and dollar-denominated. It covers the U.S. investment-grade fixed-rate bond market, with index components for a combination of the Bloomberg government and corporate securities, mortgage-backed pass-through securities, and asset-backed securities. The Bloomberg U.S. Corporate High Yield Index covers the USD-denominated, non-investment-grade, fixed-rate, taxable corporate bond market. Securities are classified as high-yield if the middle rating of Moody’s, Fitch, and S&P is Ba1/BB+/BB+ or below.